The man in the wheelchair 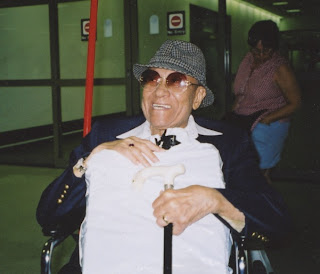 It happened a little over ten years ago. Brooklyn Girl had just gotten off the plane in Los Angeles and was making her way through the terminal when she overheard the following exchange take place behind her: "Excuse me, aren't you Fayard Nicholas?" "Yes, I am."
BG turned and saw an elderly gentleman in a wheelchair, and the passenger who had recognized him. The invalid had his own private attendant. When BG asked the attendant, "Do you know who this man is?" the question was met with a blank stare. "This is one of the greatest dancers in history!" exclaimed BG, accurately. "He's the equal of Fred Astaire!"
There was no time to explain that in their time the Nicholas Brothers had astonished the world with their dancing; that they had so impressed choreographer George Balanchine he invited them to appear in Rodgers and Hart's Babes in Arms on Broadway in 1937; that they'd been sensations in nightclubs and theatres and movies. In the above photo of the airborne duo, that's Fayard on the left, younger brother Harold on the right, hovering above the Cab Calloway band in the 1943 film Stormy Weather. Fred Astaire called this "the greatest dance number ever filmed." Reportedly it was shot in one take.
BG thanked Fayard for all the joy he and his brother had brought to our lives. Then, with his permission, she snapped his picture. The pleasure of being recognized and appreciated is evident in his face. Also evident, in the hands, is a grace that age and infirmity couldn't obscure.
In the Ziegfeld Follies of 1936, Fanny Brice hated being the act following the Nicholas Brothers. After watching their number from Stormy Weather, it's easy to see why.
Posted by Still a Brooklyn Kid at 03:43 4 comments:

How to get me to smile for the camera

I've always had trouble smiling for the camera. Browsing through the family albums, I find myself looking grim, or staring blankly, or mugging, or at best forcing a tight, little smile. Picture-takers through the generations have implored me to smile and show teeth. I just can't seem to do it convincingly, on demand.
A rare exception is the official P.S. 102 graduation picture from June, 1952. I'm in the first row, seventh from the right, smiling perfectly and flashing the pearly-whites.

I wondered about this photographic anomaly. Then a dim memory flickered and soon it all came back. Sitting next to me was a boy named Pete. Nice, friendly kid. I remember that just as the picture was being taken, Pete poked me briskly with his left arm and said something like, "Smile, goddammit!" As you can see, it worked.

Brisk poking apparently agreed with Pete. Four years later he and his twin brother Nick (front row, second from the right) both won Golden Gloves boxing championships at Madison Square Garden.
A couple of years ago, Brooklyn Girl wanted to photograph me with two of the grandchildren, but as usual my smiling mechanism was out to lunch. I said to the children, "Tickle Grandpa." They obeyed and she snapped the photo. It worked again.
Posted by Still a Brooklyn Kid at 08:55 2 comments:

Dark days, and a ray of sunshine in Brooklyn 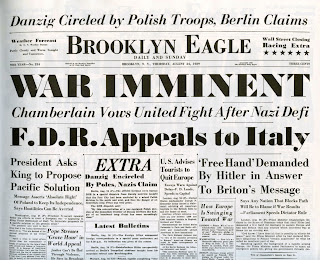 It's August 24, 1939 and the headlines in the Brooklyn Eagle say it all. Dark days indeed, but for Brooklynites a small ray of sunshine could be found tucked into the lower left-hand corner of the front page: 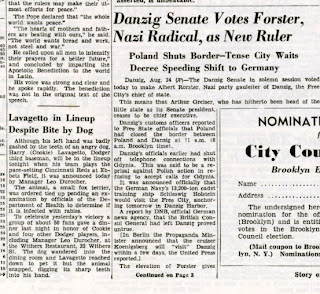 I'll save you the trouble of getting your magnifying glass. It seems a group of 50 fans held a dinner in honor of Dodger third-baseman Cookie Lavagetto at Withers Restaurant in Brooklyn. During the proceedings, a small fox terrier "wandered into the dining room and Lavagetto reached down to pet it [a typically generous gesture by a Dodger] but the animal snapped, digging its sharp teeth into his hand," leaving it "badly gashed." The good news? Manager Leo Durocher has announced that Cookie will be back in the starting lineup today at Ebbets Field against the league-leading Cincinnati Reds.
A glimmer of hope for an anxious world.
Posted by Still a Brooklyn Kid at 10:25 2 comments: 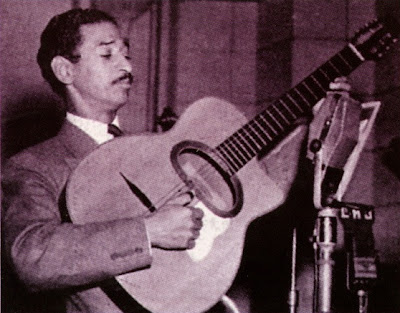 Argentine-born guitarist, singer, and entertainer Oscar Alemán was an important part of the Paris jazz scene in the 1930s. A friend and rival of Django Reinhardt, Alemán often played a metal-bodied National guitar. He had a nine-piece band at the Chantilly Club, and recorded with Josephine Baker, Bill Coleman, and Svend Asmussen. The French critic Charles Delaunay wrote, "his mere presence in a group was immediately felt through the vitality and swing he gave to the rhythm section."

In 1940 the Nazis moved in and Alemán moved out, by way of Spain, but not before German border guards confiscated his two National guitars. He returned to Argentina, where he formed a Hot Club-style quintet during the war. The side playable below was recorded in Buenos Aires in 1944. The Grappelli violin role is assumed by one Manuel Gavinovich (about whom any information would be welcome). I don't know what kind of guitar Alemán is playing on this record, but what a sound!

The critic Leonard Feather once opined that Alemán's "tone, phrasing, swing, and attack are so grand that if anyone ever mentions Django Reinhardt to me again, I shall stare coldly." No sensible person wants to get a cold stare from Leonard Feather, even a posthumous one, so let's stifle all Django references and just enjoy Oscar.
Posted by Still a Brooklyn Kid at 13:59 No comments:

Something extraordinary happened the other evening at Radio City Music Hall, but I need your help in understanding it.

Music critic Jon Pareles of the New York Times reviewed a rock concert which, in his words, "elevated modest brooding to monumental scale." The main attraction was "a 74-minute set, segueing nine compositions with no encore: an unbroken reverie." That's a Mahler-sized portion of modest brooding. Who said modern attention spans are short?

Mr. Pareles makes it clear he's been specially trained as a critic to hear things others may miss. "The pieces began quietly, often with just a lone guitar outlining a basic chord or repeating a single note, as if meditating on the possibilities within consonance." The "garbled voices" and "crashing distortion" which followed this meditation apparently had the effect of deepening the critic's reverie: "Even as it expands, the music recalls the modesty of its opening notes and often returns to them after its peak, as if each crescendo is already contained within them."

I've been brooding, modestly, about Mr. Pareles' review. It's reached such monumental scale that I'm offering a valuable prize to any reader who can penetrate his thoughts. A free Herschel Evans decoder ring goes to any reader who has ever meditated on the possibilities within consonance, and can tell me what they are.

Rossano Sportiello: a set to remember 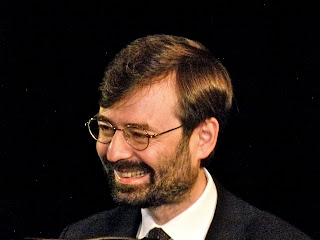 Brooklyn Girl and I have seen many sets by many pianists, but none more memorable than this 24-minute medley by Rossano Sportiello. He surprised us with this one. We knew he was conservatory-trained, but until then we'd only heard him play jazz. I thought back to the first time we'd met him, newly arrived in the U.S. and with very little English at his command. Knowing his classical background, I brought up Beethoven's syncopated, jazz-like variation in the second movement of the Opus 111 sonata; but Rossano said, in his bright, cheerful way, "I only play jazz." Now, a few years later, and with obvious emotion, he was dedicating this set to the memory of drummer Eddie Locke, who encouraged him to return to his classical roots.


Happily, ArborsJazz has posted it all on YouTube so we can relive it. Rossano starts playing stride midway through part 2, and it's spectacular. I was sitting next to a jazz pianist from the midwest. At one point late in part 2, Rossano tossed off a particularly apt phrase with such swing and precision that I gasped audibly, and the pianist next to me said, "That's it, I give up!"
Part 1:
Part 2:
For readers who don't have 24 minutes to spare, here's 2:13 of straight-ahead jazz: After You've Gone with Rossano and Steve Blailock at Ascona. BG and I weren't there, but I like this one because you can see the joy of music-making in Rossano's face.

Posted by Still a Brooklyn Kid at 06:00 No comments:

Three from the family album 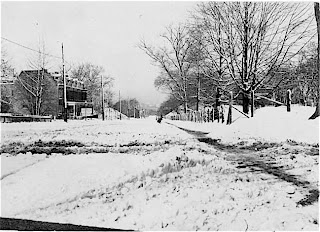 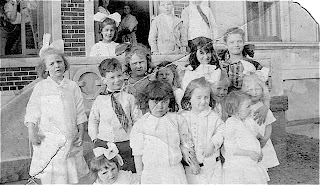 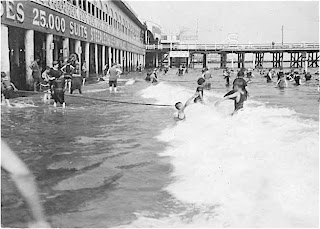 Posted by Still a Brooklyn Kid at 02:58 No comments: