[Unfortunately the YouTube clip I describe from the film On the Avenue is no longer available.] No, that's not Irving and Mildred in the clip; it's Dick Powell pitching ardent woo and singing You're Laughing at Me to a certain "Miss Hasenfeffer" in the 1937 movie On the Avenue. The Irving of my title is the songwriter, last name Berlin.


You're Laughing at Me is one of Irving Berlin's most ingenious creations. Despite its interesting features -- maybe because of them -- it's not among his most memorable or beloved songs, certainly less well-remembered than four other Berlin songs from the same movie: He Ain't Got Rhythm, This Year's Kisses, I've Got My Love to Keep Me Warm, and Slumming on Park Avenue.

The verse is simple, conventional, leading to the highly unusual opening phrase of the chorus ("You're laughing at me"). It begins on the sixth note of the scale, dips a half-tone, then rises four tones to three repeated notes, a forlorn little phrase leaving the first-time listener momentarily adrift, not knowing where it's headed next -- a fleeting moment of uncertainty suggesting the state of mind of a wooer unsure of where he stands vis-à-vis the wooee. The tonality is quickly clarified with the long phrase, "I can't be sentimental for you're laughing at me, I know," ending in a pleading, chromatic descent. Then a surprise: with the words "I want to be romantic, but I haven't a chance," the key-change sounds exactly like the bridge in a conventional A-A-B-A song, except that the B section has arrived eight measures too soon! Four bars later, another unexpected modulation ("You've got a sense of humor...") leading us back to a repeat of "You're laughing at me..." We've been fooled; turns out it's one of those "half-and-half" songs -- call it A1-A2 in form. Berlin's musical sleight of hand isn't cleverness for its own sake. The sudden shifts in tonality in bars 9 through 16 mirror Mr. Powell's inability to sustain a romantic mood in the face of heartless Hasenfeffer laughter. It's a brilliant example of form reinforcing meaning, as deft as it gets in melding words and music.

How this musically unschooled songwriter did such subtle things is one of life's great mysteries. On his compositional methods Berlin shed remarkably little light, hiding his creative struggles behind a matter-of-fact facade:

I get an idea, either a title or a phrase or a melody, and hum it out to something definite. When I have completed a song and memorized it, I dictate it to an arranger..... It's not a matter of inspiration with me at all. Generally I decide in a very prosaic way that I'm going to write something, and then I sit down and do it..... Writing both words and music, I can compose them together and make them fit.

Of You're Laughing at Me he'd probably say, "It just sounded right that way."

In his Victor recording of You're Laughing at Me, Fats Waller sings it with a light touch but surprisingly straight, in the original tempo, taking few liberties apart from some verbal asides (and, near the end, getting the lyrics wrong).

I can't imagine Mildred Bailey singing it at this tempo; apparently neither could she. Although she was capable of expressing great vulnerability in ballads (Mildred could sing any kind of pop song, superbly) she reinvents You're Laughing at Me as a medium-tempo swinger, stripped of all self-pity. Of course when it's 1937 and you're in a recording studio with Roy Eldridge on trumpet, Scoops Carry and Herbie Haymer on alto and tenor saxes, Teddy Cole, piano, and a rhythm section of John Collins, guitar, Truck Parham, bass, and Zutty Singleton, drums, swinging will be high on your agenda.

I don't know what Irving Berlin thought of Mildred's version, or if he ever heard it, but I doubt he'd be crazy about it. Most egregiously, from the songwriter's viewpoint, she changes the tempo. For Berlin, tempo and rhythm were of primary importance. What's more, she recomposes the first eight bars of his chorus, as well as the ending. Mildred's new melody line is streamlined, its predominant feature the descending chromatic phrase, which makes perfect dramatic sense in its own way. (It's also possible that, as written, the melody was too range-y for her.) Dispensing with the verse, the record is solid from the start, with Roy's muted trumpet leading the way. I like the feisty quality imparted to the song at this tempo, propelled by Mildred's marvelous feeling for time and the tasty figures played by the accompanying horns. One gets the feeling that the next time Mildred pitches woo and gets laughed at, she'll find herself a different catcher. 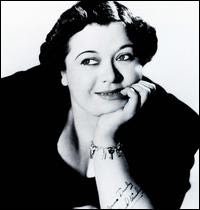 P.S. I recently learned, by accident and to my surprise, that Mildred's Says My Heart, recorded with the Norvo band and a particular favorite, was one of her biggest commercial successes, staying atop the pop charts for four weeks in 1938. I'm not sure why this should make me feel good 74 years after the fact -- a ton of junk records also were #1 -- but it does.