The question on everyone's lips is: Where does the expression "deader than Kelsey’s nuts" come from, and what does it mean? According to British etymologist Michael Quinion:


I’m told it’s an expression that former US President Richard Nixon was rather fond of using. Like other Americans before and since, he meant by it that something was unquestionably and permanently defunct. You might hear somebody say “The battery’s deader than Kelsey’s nuts”, or “His chances of surviving the election are deader than Kelsey’s nuts”. ...[W]ho or what was Kelsey and what was so special about those nuts? He turns out to have been a real person, John Kelsey, one of the pioneers of car manufacture in the USA. With the encouragement of Henry Ford, he set up the Kelsey Wheel Company in 1910. By 1913 this was based in Windsor, Ontario, just across the river from Detroit... The saying refers to the proverbially secure attachment provided by the nuts and bolts on the wheels that Kelsey’s company made. In the view of the public, nothing could be fixed more tightly. And the obvious anatomical innuendoes in those nuts made the saying just a little naughty.

Though some examples are recorded from the 1930s, the phrase began to become more widely known in the 1950s. Early on, it appeared as “tighter than Kelsey’s nuts” to mean a person who was stingy or mean, and is also recorded in the form “as safe as Kelsey’s nuts”, meaning very safe. By the early 1960s, it had evolved away from these fairly obvious formations to the imaginative and metaphorical phrase still used today.


Taking issue with eminent contributors to the Oxford English Dictionary is not my thing. However, an important bit of audio evidence has come to my attention which knocks all previous theories into the proverbial cocked hat. This 1933 recording by the Williams Washboard Band with Ted Tinsley singing, sheds new light on the controversy. No wonder all my etymologist friends are in such a tizzy. Back to you, Mr. Quinion.

To Little Jazz and Spanky: Wow! 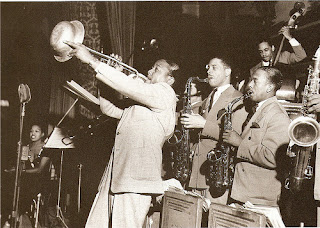 Roy Eldridge's 1937 recording of Heckler's Hop is, as every jazz fan knows, dazzling. This broadcast version captures Little Jazz & Co. at the Arcadia Ballroom in August, 1939. Zutty Singleton had been the drummer on the studio recording; by 1939 Eldridge's drummer was Panama Francis, who makes his presence vividly felt in this hard-charging air-check. It's an incomplete performance, starting in mid-bridge, but it's just long enough to capture one of my favorite spontaneous moments in live jazz recording. As Eldridge completes his stratospheric coda, the radio announcer reacts as if he'd just witnessed the repeal of the law of gravity. He totally loses both his cool and, apparently, his power of speech; all he can utter is "Wow!" Listen to the break in the voice: at this moment he's no longer the glib hepcat announcer but just another goggle-eyed fan, like the rest of us.

Thinking about Roy Eldridge, and Panama Francis, conjures more recent memories, of trumpeter and dear friend Spanky Davis. Spanky was Eldridge's protege and chosen successor as leader of the house band at Jimmy Ryan's in the early 1980s. Spanky has preserved the spirit of Roy Eldridge without imitating him, playing with his own quartet, and with Panama Francis' Savoy Sultans (in the Sultans' 1980s reincarnation), Benny Goodman, Buck Clayton, and Frank Sinatra, among many others.

Brooklyn Girl and I first met Spanky in the bygone days -- not that long ago -- when this allegedly world-class city (not New York) still featured live jazz worth going out to hear. Spanky would usually play in a downtown hotel with colleagues of the calibre of Buddy Tate, Plas Johnson, Gus Johnson, and Milt Hinton, thus providing us with a lifetime's worth of "Wow!" moments. Just as indelible are the extracurricular memories of Spanky: the friendship, the jokes and the anecdotes, his hilarious impressions of Benny Goodman and Pee Wee Marquette, the emotion in his voice as he talked about Eldridge shortly after Roy's death in 1989, and those unforgettable three-and-a-half-hour meals together at our favorite Chinese restaurant.
Brooklyn Girl captured the essence of Spanky in this oil painting, which now hangs in its rightful place: Spanky-and-Rosie's house. 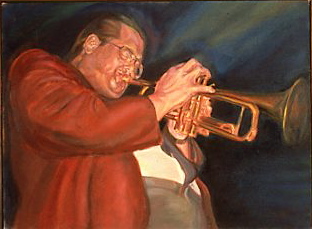 In this YouTube clip of I Remember Clifford, Spanky pays eloquent tribute to the memory of trumpeter Clifford Brown. But today we're remembering Little Jazz and Spanky.
Posted by Still a Brooklyn Kid at 07:04 3 comments: 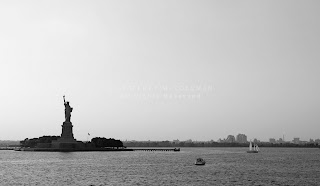 When Mom was growing up on 71st Street in Bay Ridge -- and years later when I was growing up in the same house -- the Statue of Liberty was an unchanging part of the backdrop of our everyday lives.
Our house was located just to the left of the "W" on the compass of this map: From the shore, a block and a half from our house, if it wasn't too smoggy, you could see the statue in the distant northwest. Knowing it was there made it a constant presence: when we watched the big ships coming and going through the Narrows during World War Two, and later in the 1940s when we'd hop the black wrought-iron fence and play ball in the park bordering the Belt Parkway and the Narrows. And on steaming-hot summer days or evenings, we could walk over to 69th (Bay Ridge Avenue) and take the ferry to Staten Island, just for the breezes. (Fare: one nickel.) Then we'd get a good view of the statue, smog or no smog.

If the two family photos below had been taken using super-extra-wide-angle lenses (a magnifying glass would also come in handy) you'd see the statue way out there in the harbor.
Here's Mom in 1933 at the 69th Street ferry pier: 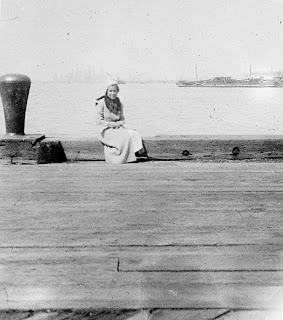 We kids took pride in our proximity to the Statue of Liberty; it was one of the niftier features of the neighborhood -- a bragging-point. Of course our ability to see the statue, however faintly, from the shore (on a smog-free day) didn't make it our statue, any more than Sarah Palin's ability to see Russia from her house makes her an expert on foreign policy. In our defense, though, we were eight years old at the time, and not one of us was a candidate for Vice-President of the United States.
The special relationship we felt we had with the statue didn't depend on proximity alone; it was based on what we were taught in school. Unlike my Democratic parents, the teachers at P.S. 102 were Republicans to the core (not surprising in Republican Bay Ridge) and they made no secret of it. But when it came to the statue, politics didn't matter; we were all of one mind. My fourth-grade teacher, Miss Hannigan, used to remind us how lucky we were to live within sight of this welcoming American icon. She used to recite, in reverent, hushed tones, the Emma Lazarus sonnet engraved on a tablet within the pedestal. 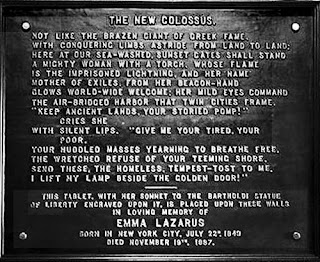 I remember Miss H telling us that we're all immigrants in this country, that immigration is a source of strength for America, and that the statue represents hope for a better life.

I've been to Liberty Island twice, once just after the war (we couldn't go all the way to the top of the statue; the upraised arm was closed for repairs) and again, memorably, almost twenty years ago, a combined visit to the statue and the newly renovated Ellis Island Immigration Museum.
So naturally I thought I knew something about Miss Liberty and what she stands for -- that is, until recently when Sarah Palin blew in from Alaska, and Glenn Beck arrived from whatever planet he calls home, to set me straight.
Beck has had a lot to say about the statue lately. In his alternate universe, Frédéric Auguste Bartholdi's creation isn't about welcoming immigrants at all. (How can it be, given Beck's views on immigration?) The statue, he informs us, is actually an angry statement of defiance. "We have so misunderstood the Statue of Liberty," he says. "You think that it's a protection of those 'poor, tired [sic], huddled masses'? Let me tell you the truth about the Statue of Liberty... The French were actually using us... It was actually a slap in the face to the old world..." (Those perfidious French; even when they give us a gift, they're using us!)
Beck also has unorthodox views on the sonnet by Emma Lazarus. He says it must never be recited in hushed tones; that's because it's so angry. He proceeds to justify his novel interpretation by reciting it very loudly and very angrily. The whole performance is readily available on YouTube for viewing by anyone willing to take the punishment. Back in P.S. 102, the staunchly Republican Miss Hannigan would not have been pleased with eight-year-old Glenn or his bilious reading of the poem.
Then Sarah Palin arrived on the scene, in the course of her bus tour of national landmarks. Summoning all the eloquence at her command, the ex-half-term governor said: “This Statue of Liberty was gifted to us by foreign leaders, really as a warning to us, it was a warning to us to stay unique and to stay exceptional from other countries. Certainly not to go down the path of other countries that adopted socialist policies... It’s also a “warning” of sorts, as France encouraged us to keep democracy alive as the recipient of this gift… basically telling us not to blow it!"

In Palinland, the mother of exiles with mild eyes is no welcoming figure; she's actually a massive policewoman. That upraised torch? Not a beacon of hope but an enforcer's flashlight, strip-searching all newcomers for alien ideas. 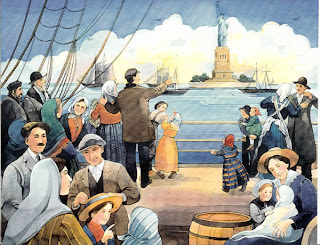 And what of all those pictures of excited immigrants of yesteryear seeing the statue for the first time? What are they looking so happy about? They should be cowering in fear. The Great Warning looms ahead in the harbor, flashlight in hand, admonishing them with silent lips: Don't blow it.

As I re-listen to Palin's exegesis on the statue, my thoughts wander back again to fourth grade. I can hear the staunchly Republican Miss Hannigan saying, "Sarah, stand up and tell the class what the Statue of Liberty means to you." I guarantee, if Miss H had gotten a response remotely similar to Palin's, she'd have interrupted with great annoyance and said, "Sit down, Sarah. Doris, can you do any better?"