"Nothing is missing and nothing is superfluous"

In the 1920s, the Spanish composer Mompou was part of a group of artists, writers, and musicians called Noucentistes ("Twentieth-centurists") whose aesthetic aim was a return to clarity and simplicity. Inspired more by the French impressionists than by the modernism of Stravinsky or Hindemith, Mompou declared, "My only desire is to write works in which nothing is missing and nothing is superfluous."

Much of Mompou's set of Cançons i Danses for piano draws on Catalan folk themes, but this one, No. 6 -- my favorite  -- is entirely original. You can go to YouTube and hear the song section played by the legendary pianist Arturo Benedetti Michelangeli, but the dance is omitted. You can hear the complete No. 6, song and dance, played by the composer himself, but Mompou's aging fingers were regrettably past the dancing stage when he recorded it. (It's no disrespect to Mompou to say that someday I'd love to hear this music in the hands of a great jazz pianist/improviser -- a Rossano Sportiello, for example.) 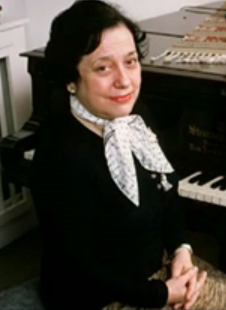 Posted by Still a Brooklyn Kid at 10:21 No comments:

Serenade to a bed quilt 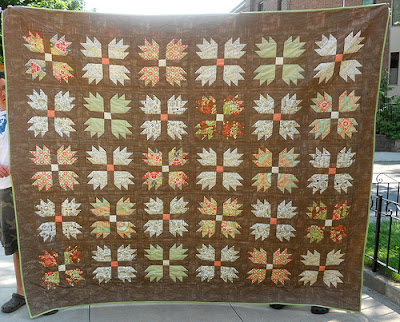 It's the biggest, most beautiful present I've ever received: a king-size bed quilt, lovingly made by Brooklyn Baby over many months. BB has become a quilt-making whiz (just one of her many whizbang qualties) but this project eclipses all others in complexity, detailed craftsmanship, and sheer humongosity, which may explain why it arrived six months after my birthday. If ever a gift was worth waiting for, this was it. (The making of this epic production is chronicled here.)

The quilt is called "Bear Pa" (bear paw) and as you can see, it's a model of harmony and balance, its patterns and colors a source of unceasing interest and delight. Now examine the photo above using a high-powered microscope. You'll find exquisite hand stitching around each paw and "free-motion" quilting in the shape of little leaves in the outer borders, making the quilt as pleasing texturally as it is visually. Incredible.

Mom would take one look at this quilt, shake her head in awe, and say, "Imagine, all that work!"

As the adage says, the proof of the quilt is in the sleeping. I've lived with "Bear Pa" for well over two weeks now, and can report having copped many soothing z's beneath it. Nor did the quilt's tactile appeal go unnoticed by our two pussycats, who are expert in the matter of finding good napping places. Upon the quilt's arrival, they promptly pencilled "Bear Pa" into the late-afternoon slot on their daily itinerary. I've been told that, given the choice between hand-made and mass-produced, pussycats will choose hand-made every time. I believe it. When it comes to comfort and pleasure, cats have unerringly good judgment. 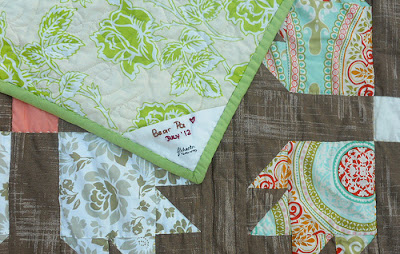 How to celebrate and give thanks for such a gift? I consulted my memory-bank (otherwise known as iTunes) for an appropriate song title. Rejecting such obvious, mundane choices as Thanks a Million and other thank-you songs, I settled on Under a Blanket of Blue. Okay, so it's a quilt, not a blanket, and it's not blue, but the title comes close enough, and the mood of the melody is right on the money.

Taken at a more placid tempo than the Hawkins, this less well-known 1947 version of Under a Blanket of Blue perfectly captures the mood of repose induced by my new quilt. It's a Red Norvo group including Red on xylophone, Benny Carter, alto, Dave Barbour, guitar, Arnold Ross, piano, Billy Hadnott, bass, and Jesse Price, drums, but the highlight for me is the opening chorus, which does not stray far from Jerry Livingston's lovely melody. The theme is stated simply and eloquently by Eddie Miller's tenor sax in a manner aptly described by one perceptive critic as "melting," with Bobby Sherwood taking the B section on cornet, carressing each phrase with Bobby Hackett-like delicacy.

As the "pa" in the quilt's name (and the "bear," too, for that matter) I can't thank BB enough for this precious gift. Imagine, all that work!