Chicken and waffles and corn muffins and the Fort Hamilton Philharmonic

So it's absurdly early of a Sunday morning, Brooklyn Girl is still sleeping, The Little One is coming over for a visit in a few hours, and what am I doing? Naturally, I'm making corn muffins, my favorite complement to the daily caffeine fix (except when there's a cheese danish lurking somewhere in the vicinity).

As per custom, my culinary labors are accompanied by the iPod merrily shuffling its way through a jazz playlist -- softly, so as not to waken BG. And just as I'm giving the finished muffins "the toothpick test" (they passed with flying colors), what should come up in the shuffle but Bunny Berigan's Chicken and Waffles, a 1935 side with Bunny in dazzling mid-season form on trumpet; Eddie Miller, tenor sax; Edgar Sampson, clarinet; Cliff Jackson, piano; Grachan Moncur, bass; Ray Bauduc, drums. 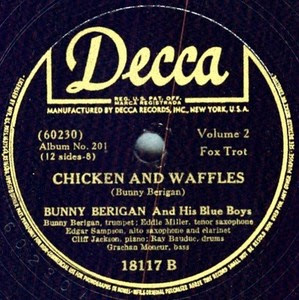 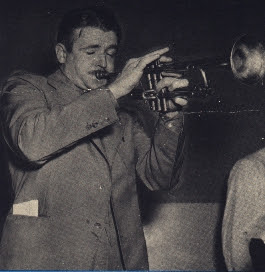 Needless to say, the sight of my eighteen perfectly puffed-up muffins, combined with the record's evocative title, got the gastric juices flowing at a rapid rate, requiring a supreme effort to quell. (It's considered extremely bad form for the chef to gobble up half the meal before the guests have arrived.) Meanwhile the nostalgia was also flowing thick and fast. Sixty years ago, a Bunny Berigan memorial album on Decca -- including Chicken and Waffles, Blues, You Took Advantage of Me, I'm Coming Virginia, The Buzzard, and Tillie's Downtown Now -- was one of the cornerstones of my tiny collection of jazz 78s. It was the early 1950s and I was a high school freshman. Inspired by Bunny and Pops, I was taking trumpet lessons while holding the second chair in the trumpet section of the Fort Hamilton High School orchestra under the baton of the kindly Mr. Chelimsky. Actually I did more than hold the chair; I played some, too.

Of course I couldn't improvise, but I knew Chicken and Waffles so thoroughly that I was able to replicate Bunny's coda (from 2:52 to 2:57), an effort that taxed my technique to the limit but was highly satisfying nonetheless. I taught this little coda to my trumpet section-mate and it became part of our warm-up ritual before rehearsals, a running gag that soon spread to the other orchestral sections. (It amuses me to think that dozens of Fort Hamilton graduates with absolutely no interest in jazz probably still remember Bunny's coda to Chicken and Waffles.)

I wish I could report that my Berigan-inspired warm-up exercise bore musical fruit, but in truth my trumpet career didn't last long. As soon as triple-tonguing reared its ugly head, I was a goner. (The syllables "tu-tu-ku" still strike terrror in my heart.) But the memory of the Fort Hamilton Philharmonic's rendition of Wagner's Rienzi overture, especially its crashing climax, still brings a smile to my lips, followed closely by guffaws. I'll never forget the sight of Mr. Chelimsky, arms waving frantically as the strings, woodwinds, brasses, and timpani lumbered noisily -- and almost in synchronization -- toward the overture's conclusion. The expression on the maestro's face strongly resembled that of some unfortunate chump who finds himself standing on the railroad tracks face-to--face with an onrushing train.

On a more positive note, today's corn muffins were delicious.