Too good to ignore


The title of the 1945 song I'm Just a Lucky So-and-So -- music by Duke Ellington, lyrics by Mack David -- is an apt self-description of anyone within earshot of Rebecca Kilgore singing it, or anyone who has discovered the postings on the Jazz Lives website. Although this performance has already been posted elsewhere, it is, in Eddie Condon's phrase, too good to ignore.
Over the years the song has been recorded by many, including Ella Fitzgerald, Sarah Vaughan, Louis Armstrong, and -- a particular favorite of mine -- Jay McShann with Jim Galloway in 1983. Becky's performance here with musical soulmates trombonist Dan Barrett and pianist Rossano Sportiello, all dispensing beauty in equal measure, is as great as any of them.
Whoever this "Jazz Lives" fellow is, we're lucky so-and-so's to have him around. I'm thankful I live in an age when such a performance as this can be captured, preserved, and viewed worldwide, for all time.
Posted by Still a Brooklyn Kid at 06:34 No comments:

The wisdom of planning and preparation 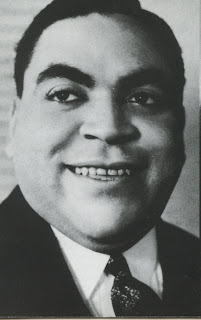 On March 1, 1929, Thomas "Fats" Waller, already a master of Harlem stride piano and songwriting whiz with Ain't Misbehavin' and Black and Blue to his name, entered Liederkranz Hall in New York to lead a recording session. The sides produced that day have been precious to me (in LP and CD form) for most of my adult life, imperishable classics of early jazz.


That these records were made at all is a minor miracle, for which we can thank not just Waller but also Eddie Condon, cast by Providence in the unlikely rôle of guardian angel (which, if you know anything about Condon, is a brilliant example of casting against type).

A couple of weeks after organizing the recording of That's a Serious Thing and I'm Gonna Stomp Mr. Henry Lee, Condon was paid $75 to do something that Victor Records' executives had so far been unable to do: deliver Fats Waller to a recording studio on time, with a well-rehearsed band. "The date is four days from now," Condon was told. "That will give you time to assemble a band and rehearse it."

Andy Razaf's lyric to Ain't Misbehavin', "I don't stay out late / don't care to go, / I'm home about eight / just me and my radio," did not apply to Waller, so Condon realized the task would be difficult. Little did he know that getting Fats to the recording studio would be of the same order of magnitude and difficulty as harnessing the power of the rivers or the sun to produce useable energy.

Condon went up to Harlem to Connie's Inn and introduced himself to his favorite piano player:

He was so amiable, so agreeable, so good-natured [wrote Condon in his memoir We Called It Music] that I felt almost ashamed of my mission, but I performed it; I asked Fats about making a record. A recording date? He'd be delighted, he'd be proud; just any time. In four days? Fine. Wonderful. At noon? Perfect.

Condon phoned the Victor exec and was told, "We shall expect you at noon on Friday. You had better stay close to Waller."

I did but every time I opened my mouth to say something about getting the band together or discussing the numbers to be played, Fats said, "Fine! Wonderful! Perfect!" and handed me another belt of gin. We were in perfect accord on everything. Nothing happened.

After three hazy, gin-drenched days, there was still no band, no music. Condon asked Waller what the band was going to play. "Why, we'll play music," said Fats. "Now let's have a little drink and talk about it." At this point, according to Condon, "things grew faint and finally dark."

At the eleventh hour, Condon and Waller awoke from their respective stupors. Waller made some quick phone calls and rounded up trumpeter Charlie Gaines, trombonist Charlie Irvis, and reedman Arville Harris. Condon, who had not expected to be part of the band, asked Waller: "Well, what are you going to play?" "You mean what are we going to play," replied Fats. ""Man, you're with us."

So the five men decanted themselves into a taxi, swung by the Riverside Towers to pick up Condon's banjo, and careened toward Liederkranz Hall. Inside the cab, Fats was sketching out the musical program:

He hummed a simple, basic pattern of rhythm and melody... When we had it memorized, he explained what each of us was to do. "You got that, Charlie?" he said. Both Charlies said yes. They had it.

So fertile was Waller's musical imagination that he could compose tunes as easily as he could improvise a jazz chorus; "so fluent as a composer," wrote John S. Wilson, "and so eternally in need of money that he was very casual about all but giving away many of his compositions." (It's said Waller composed his six-part London Suite on the spot, at the piano, while his manager, Ed Kirkeby, was describing the various sections of London to be portrayed.)

The taxi arrived at Liederkranz Hall at ten minutes to twelve. "I see you are punctual," said Mr. Adams, one of the execs. "Congratulations. Well, Mr. Waller, what is it to be this morning?" "A little thing we call The Minor Drag," replied Fats.

We set up our instruments and Fats repeated his instructions. He played the theme for us; as soon as I heard him I knew why we didn't need drums -- his left hand would take care of the bass. "Ready?" Fats said. "Let's go," one of the Charlies said. 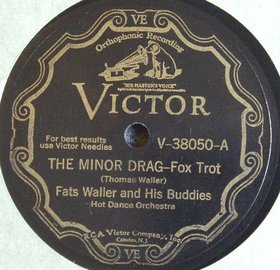 While acknowledging Condon's importance as an organizer and promoter of jazz, some critics past and present have disparaged his rhythm playing. I disagree. The Minor Drag is closely miked and Condon's banjo is often clearly audible. Seems to me he's kicking things along quite nicely.

We listened to the playback. I had a difficult time believing what I heard because it sounded wonderful. I looked at Mr. Adams. He was smiling. "You see," he said to me, "what careful rehearsal will do?"

After The Minor Drag and Harlem Fuss had been cut, as an afterthought Mr. Adams said, "I wonder, Mr. Waller, if we could have some piano solos now?" "Wonderful!" Fats said. "Perfect!" -- and without moving from the bench he proceeded to toss off two solo masterpieces, Numb Fumblin' and that ne plus ultra of Harlem stride piano, Handful of Keys:


When the session was over, Mr. Adams pronounced himself pleased. "We must have some more of these dates," he said. "This is an excellent example of the wisdom of planning and preparation."
Posted by Still a Brooklyn Kid at 09:34 2 comments: 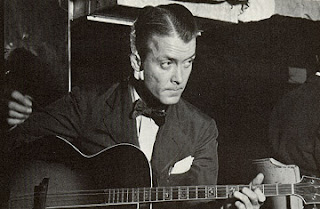 
A young guitarist-banjo player named Eddie Condon goes up to Harlem to hear Charlie Johnson's band at Small's Paradise on 135th Street. "Somebody ought to put this music on records," he says to himself. "It's too good to miss." So Condon goes to Ralph Peer of Victor Records and makes his case: "I want to use [trumpeter Leonard "Ham"] Davis, [tenor saxophonist Happy] Cauldwell, and [drummer George] Stafford" [all from the Johnson band] with some friends of mine -- [trombonist] Jack Teagarden, [pianist] Joe Sullivan, and [reedman Mezz] Mezzrow."

Peer agrees to Condon's idea, saying, "I hope it's good." Here's one of the sides cut that day, That's a Serious Thing. The vocal is by Teagarden. 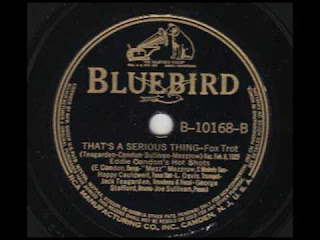 Not only was it good; it was history-making. As Condon wrote in his memoir, We Called It Music:


When the masters were cut Mr. Peer congratulated me. "You were right about the music," he said. "it is excellent. All in all I should say this has been an interesting experiment." It wasn't until I got out in the street that I realized what he meant. I made some inquiries: so far as I could discover we had made the first mixed recording date on any national label, using both white and Negro musicians. I thought it had been done long before.

The quote is typical of him. Eddie Condon had no socio-ethno-political agenda. He was color-blind for the purest of reasons; the music he loved was his only agenda.

Some years ago I was listening to this record and came to a startling realization. As far as I know, outside of civil rights organizing and lobbying, no other field of human endeavor on earth had blacks and whites working together in 1929 to produce something of lasting value and beauty.

In his long career Eddie Condon arguably did more to organize and promote pure jazz than anyone. He was also the unlikeliest civil rights champion in history. To my mind he's the most important and influential American cultural figure never to have been the subject of a major biography.