Two amazing, wonderful things happened during my senior year of high school, 1955-56, two things which had never happened before and will never happen again: the Brooklyn Dodgers won the World Series, and I shook hands and chatted with Louis Armstrong.
It was my classmate Richie Schlesinger's idea. We didn't yet have our draft cards, but as long as we were forthright about it and thus willing to eschew alcohol, we could still go on a double-date and be admitted to see Armstrong and the all-stars (Edmond Hall, Trummy Young, Billy Kyle, Arvell Shaw, Barrett Deems) then appearing at Basin Street East. 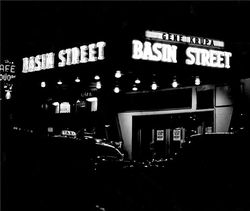 I had already seen Armstrong in concert, from the balcony of the Brooklyn Academy of Music, but as I was to discover when the four of us arrived early at the club, this was different: they'd given us a front-row table, this far from the musicians. The evening was pure heaven.

Between sets, a lady with a camera came around offering patrons the opportunity to get their picture taken with Pops, at $5 a pop. Many a time in my life have I failed to speak up in a timely way and seize an opportunity. Fortunately this wasn't one of those coulda-woulda-shoulda moments; I sprang for the five bucks (huge money to a teenager in those days; enough for four general-admission tickets at Ebbets Field). I was ushered to the great man's side. What to say? At the time the sum total of my knowledge of jazz history was a book by Belgian critic Robert Goffin, borrowed from the school library, and A History of Jazz in America by Barry Ulanov. I had the Satch Plays Fats LP and, I think, the first of Columbia's Hot Five reissues. I mumbled something adulatory and managed to formulate some sort of question about King Oliver, to which he replied with much tenderness:
"He was like a daddy to me."
The camera-lady aimed and Pops and I shook hands as the flash went off. His skin felt like well-worn leather. During the second set the photo, in a Basin Street East commemorative frame of heavy glossy stock, was delivered to our table. Somewhere there is, or once was, a photograph of an awkward, awestruck, acne'd adolescent shaking hands and chatting with Louis Armstrong, but I can't find it. I haven't seen it in years. I'll continue searching the family archives, but prospects are dim.
Memory is a ruthless and somewhat capricious editor, highlighting some facts to crystalline clarity while obliterating others entirely. Brooklyn Girl once asked me who the girls were on the double date with me and Richie. I had no answer because I had no memory. Still don't. I've googled my brain many times over the years ("Armstrong photo Basin Street East dates") and I come up with nothing. Zero.
My apologies go to the uncredited girls who get no billing in this vignette. I've lost their names and I've lost the photo, but I do have the memory of Armstrong's handshake and the seven words he spoke to me. That's sufficient.
Posted by Still a Brooklyn Kid at 12:29 1 comment:

In response to this post, Emilio Caceres' son has written to explain why his father didn't follow brother Ernie's path as a touring jazz musician. Emilio "did not enjoy the road at all. Although he spent time in the Michigan and Ohio area, and in New York that culminated with appearances on the Benny Goodman Camel Hour, he preferred to be home... He had numerous offers, from Abe Lyman in the early forties to Pete Fountain in the sixties. But dad refused to leave his home in San Antonio."


Emilio's daughter-in-law has also responded, commenting on "beautiful music from a beautiful man."


Such a great, underappreciated swing violinist deserves an encore. Instead of wondering what might have been, let's enjoy what is. Here's Emilio, together with brother Ernie on clarinet, in a dynamite I Got Rhythm from 1937. (Is that cousin Johnny Gomez on guitar?)


In a world starved for joy and beauty, who could ask for anything more?