To Brooklyn Girl on her birthday 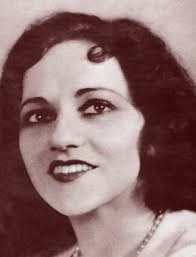 Connie Boswell gets the essential arithmetic right -- me minus you means just nothin' at all, but me plus you equals love. Happy birthday!
Posted by Still a Brooklyn Kid at 08:46 2 comments: 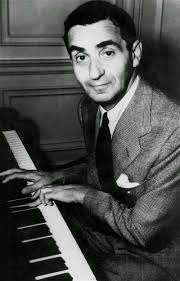 Let's imagine it's many years ago and Irving Berlin is not a songwriting and music publishing colossus. Instead he's Irving Nobody, aspiring composer-lyricist, peddling his wares on Tin Pan Alley. With hope in his heart and songs in his portfolio, he enters the office of Pippik Publishing. Sid Pippik, who likes to boast that he's produced more hits than Ty Cobb, is feeling magnanimous; he'll give this unimpressive-looking young man ten minutes.

Irving hands his first song to Pippik's piano player, who accompanies Irving as he sings. After four bars Pippik stops the music. "Can't use it," he says. Sid Pippik is no musician but he's savvy enough to spot a beginner's mistake. "You take the words 'Blue skies smiling at me' and put 'em in a minor key? That's wrong. What else you got?" Under his breath the publisher mumbles something about amateurs.

"Here's a peppy one," says Irving.

The piano player looks at the music and does a double-take at the complexity of the chorus’ opening bars; but no problem, he's an ace sight-reader. Irving starts singing and Pippik is pleased with the verse. Then the chorus begins: "If you're blue and you don't know where to go to, why don't you go where Harlem sits, puttin' on the ritz...  "

Undeterred, Irving pulls out another song. "You're gonna love this one. It's a Christmas song. Can't miss."

Pippik likes the idea of a Christmas song; he can hear the chimes of a cash register jingling merrily every December for the rest of his life. Alas, the publisher's dreams are dashed by the song's first eight notes, something about a white Christmas. "Whoa there!" he cries, obviously in great distress. "Are you kidding me? That opening line, it's all whaddyacallem...?"

"Half-tones," says the piano player, helping out his boss. "It's chromatic."

"You can't do that in a Christmas song," declares Pippik, who's had enough mishegas for one day. "Look, kid, you're an eager beaver but you don't know the basics of pop songwriting. Now take your Chromatic Christmas and get outa here."

Pippik relents. This time he likes what he hears in the verse, especially the part about the puppydog. He likes the opening bars of the chorus - a nice, placid phrase befitting the words "Lazy, I want to be lazy." Within sixteen bars, however, the publisher has heard enough. "Where's this damn thing going?” he snarls. “It's too complicated. You call the song Lazy but it's all over the place!"

We'll end the thought-experiment here, just before the young songwriter gets the heave-ho from Pippik’s office. But we shouldn't judge the publisher too harshly; he was just thinking conventionally. He would have snatched up any of Irving’s simple, straightforward songs in a heartbeat - Always, All Alone, What’ll I Do, or Mandy, for example. Irving Berlin was a master of “simple” - not as easy as it sounds; in fact, a high artistic achievement. About one of Berlin’s "simple" songs (I think it was Always) a fellow-songwriter once complained, "Irving, anybody could have written that song!" -- to which Berlin replied, "Yes, but I did."

As Sid Pippik learned that imaginary day, Irving Berlin did a lot more than simple. He had the uncanny ability to break the rules, take the daring, improbable, unorthodox route, and make it work. And make all of America sing along. Berlin’s genius is so great that you hardly notice it at all.

Lazy, a huge hit in 1924, is a highly unconventional pop song. Here's the chorus:

Lazy, I want to be lazy.
I long to be out in the sun
With no work to be done,
Under that awning
They call the sky,
Stretching and yawning,
And let the world go drifting by.
I want to peep
Through the deep tangled wildwood,
Counting sheep
'Til I sleep like a child would;
With a great big valise full
Of books to read where it's peaceful,
While I'm killing time
Being lazy.

Berlin would have scoffed at the term "art song." He saw himself as a toiler in the pop-music business, a superior one but a toiler nonetheless. To him a hit song was a good song and vice-versa. I have no problem applying the term “art song’ to Lazy; it deserves the appellation as much as any lied by Schubert or Schumann - which is why the nuanced, "classical" approach taken here by Joan Morris and William Bolcom works for me:

Sid Pippik had a point: for a song called Lazy, this is not a song at peace. The chorus adheres to none of the comfortable, standard, pop-music forms. Phrases echo previous phrases in shape, but there are no repeated sections. Harmonies darken unexpectedly. The descending two-note figure on the word "lazy," uttered twice in the opening line, is echoed six times thereafter but (until the ending) never in the same place on the scale. The restlessness of this two-note figure is the key to the song's poignant appeal. In 1924 Lazy expressed a yearning that resonated powerfully with an audience comprised largely of immigrants who worked long hours at soul-draining jobs, very few of whom ever got within peeping distance of deep tangled wildwood. 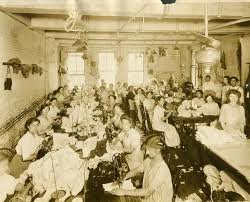 The song still appeals today because that yearning is universal, and because it's simply a beautiful song. The only thing that's changed is that for most people, a vision of heaven on earth no longer features a valise full of books.

The phrase "deep tangled wildwood" was not Berlin's invention; he appropriated it. Marc Connelly and George S. Kaufman wrote a play called The Deep Tangled Wildwood which opened on Broadway a year earlier, in 1923, and ran for less than a week. Later Connelly recalled: "Our play quickly faded from the public memory, but the title stayed alive in the words of Irving Berlin's popular Lazy. If you ever sang: 'I want to peep through the deep tangled wildwood, counting sheep 'til I sleep like a child would,' you may have thought Berlin had Samuel Woodworth in mind." (Woodworth wrote the popular poem The Old Oaken Bucket which begins: "How dear to this heart are the scenes of my childhood, / When fond recollection presents them to view! / The orchard, the meadow, the deep-tangled wild-wood, / And every loved spot which my infancy knew.")

Finally, here’s Lazy the way most of Irving Berlin’s audience first heard it - on Al Jolson’s 1924 hit record:
Posted by Still a Brooklyn Kid at 07:04 1 comment:

Rochester shows what he can do


In a previous post I recalled seeing Eddie "Rochester" Anderson as a song-and-dance man. I've found the movie in question: Buck Benny Rides Again, a 1940 programmer that brought Jack Benny's radio cast, and its recurring mock-Western "Buck Benny" sketch, to the screen. The film is forgettable, except for this scene in which Eddie Anderson shows what a fine all-round performer he was. His partner is Theresa Harris.
Posted by Still a Brooklyn Kid at 06:55 No comments:

My bathtub runneth over 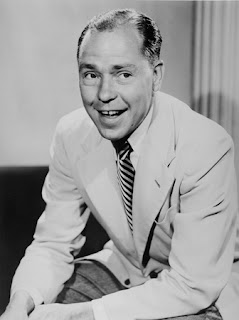 Lots of reasons to post this one: I love Johnny Mercer's lyrics, especially when Johnny Mercer is singing them.  I love this song, The Bathtub Ran Over Again, in which he's abetted by Stirling Bose, cornet, Jack Teagarden, trombone, Fulton McGrath, piano, and Dick McDonough, guitar. Our friend Tina and my blogfather, the learned Dr. Steinmetz, love the song, too. One more reason to post it: to give you a smile this fine day.
Posted by Still a Brooklyn Kid at 07:55 2 comments:

The day Rochester and his friend Louis Armstrong got de-Morgenthau'ed

Eddie Anderson was more than a skilled comedian. In movies such as Cabin in the Sky and Brewster's Millions he was also an actor of some subtlety, and in the movie Buck Benny Rides Again (1940), an adept song-and-dance man. During the heyday of Jack Benny's radio program in the 1940s, the character of Rochester, played by Anderson, was so popular that Benny paid him $100,000 a year, making him the highest-paid African-American actor. The relationship between the characters they played on the air was complex, groundbreaking, and just a touch subversive: Benny the stingy boss, but boss in name only; Rochester, in the tradition of Beaumarchais' Figaro and Wodehouse's Jeeves, the butler-valet who's always one step ahead of him, manipulating him at will, feeding his vanity even while mocking it. The following exchange is typical and exemplifies the "radio joke," one that depends on a non-visual medium for its surprise and punch:


ROCHESTER: Look, boss, I pressed your blue suit. How does it look?
BENNY: Fine. Now take it off and get back to work.


During World War Two, the shows often emanated from military bases. I've listened to them. The receptions given Rochester, marked by boisterous cheers, were usually louder than those accorded other cast members, even big-name guest stars. I believe the buck privates, the grunts, identified with the character, rooting him on as he found new ways to circumvent the High Command.

Benny and Anderson remained close, professionally and personally. When Benny trademarked the character-name Rochester, he sold Anderson the trademark for one dollar. In time Benny and his writers eliminated all jokes involving racial stereotypes. After the war, Benny would often end his broadcast with a statement denouncing racial prejudice.


Anderson invested wisely and eventually became quite wealthy. He was entrepreneurial. During the war he owned a parachute company selling to the army and navy, managed a boxer, and in 1943 became the first-ever African-American owner of a racehorse, named Burnt Cork, to run in the Kentucky Derby. Unfortunately Burnt Cork finished dead last.

As they occasionally did, Benny's writers wrote the real-life incident into the script the next week. I've excerpted about seven minutes from the May 9, 1943 program, playable below. Rochester has been away for two weeks, having attended the Derby in Louisville. Now back in Los Angeles, he and surprise guest Louis Armstrong are preparing to go out on a double date while lamenting their losing bets on Burnt Cork. Armstrong always handled dialogue well, as he demonstrates in this exchange:

ARMSTRONG: What are we gonna do for money tonight?
ROCHESTER: Satch, you got money.
ARMSTRONG: I had money, until that horse of yours de-Morgenthau'ed me.

Time out while I explain the topical joke. Henry Morgenthau Jr. was Secretary of the Treasury at the time, for years a well-known public figure in FDR's New Deal. It was his signature adorning all your folding green.

The point is, that's a difficult punchline, but Pops aces it and gets a huge laugh.

My excerpt ends with Armstrong singing and playing Lazy River. Unlike obscure references to Henry Morgenthau Jr., the music needs no explanation from anyone, and never will. 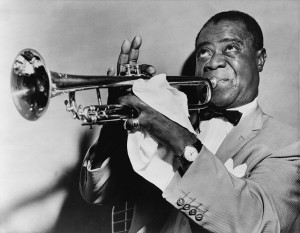