This one's dedicated to Brooklyn Girl, Brooklyn Baby (who loved this record when she was little), Miriam, Tina, Legrand Sidney Doggett, and the acai berry. The Revelers' skillful close-harmony singing and the arrangement may be as dated as a 1926 Victrola, but the sentiment expressed is as genuine today as ever.
Posted by Still a Brooklyn Kid at 09:50 1 comment: 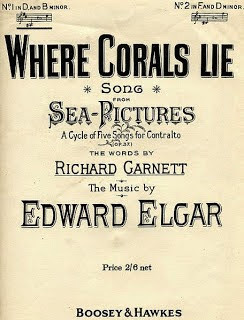 When the glorious mezzo-soprano Janet Baker and conductor John Barbirolli recorded Elgar's Sea Pictures in 1965, it was one of those rare moments when the right music found its ideal interpreters at the peak of their powers. With the stars thus in proper alignment, magic happened.

First performed in 1899, Sea Pictures is a cycle of five songs, with texts by five different poets. I don't love the five equally. In Haven, with words by Caroline Alice Elgar, the composer's wife, is a beauty. Where Corals Lie is my favorite. I hope your computer speakers are good enough to pick up Elgar's orchestral touches as brought out by Barbirolli, especially the woodwind accents and the luminous way the cellos double the vocal line in the second stanza.

The poem Where Corals Lie was written by Richard Garnett. Here's the text, with Elgar's repeats: