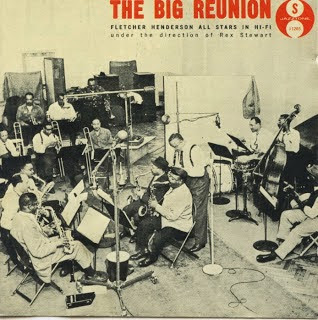 [This is a re-write of an earlier entry, posted here because it demands an answer to an important question, one that can only be provided by the learned scholar Legrand Sidney Doggett. Yes, I’m talking to you, Mr. Doggett: What is the order of trumpet soloists on Sugar Foot Stomp on the 1957 album “The Great Reunion”? Only you have the know-how and resources to provide the definitive answer.. Update: LSG has replied with his usual alacrity and expertise, and I can rest at ease. Thank you sir!]

A list of great musicians who played with the Fletcher Henderson orchestra reads like a who's who of jazz. Henderson first recorded Don Redman's famous arrangement of Sugar Foot Stomp (derived from King Oliver's Dippermouth Blues) in 1923 with an orchestra including Louis Armstrong and Joe Smith in the trumpet section, and Redman, Coleman Hawkins, and Buster Bailey in the reed section. The young Armstrong had only recently joined the band.

As Henderson tells it in the oral history Hear Me Talkin' To Ya:

The band at first was inclined to be a bit reserved toward the new arrival and there seemed to be a little tension in the air. At rehearsal he was perplexed by the trumpet part... Now, those parts were well marked with all the dynamics of the music, and at one point the orchestration was indicated as fff with a diminuendo down to pp.

The band followed these notations and was playing very softly, while Louis still played his part at full volume. I stopped the band and said, "Louis, you are not following the arrangement."

Louis objected, saying, "I'm reading everything on this sheet." I said, "But Louis, how about that pp?" and Louis broke us all up by replying, "Oh, I thought that meant pound plenty." There was no tension after that.


In 1957 producer George T. Simon recorded a big band under Rex Stewart's direction, consisting of a bunch of nobodies: Stewart, Taft Jordan, Emmett Berry, and Joe Thomas, trumpets; J.C. Higginbotham, Benny Morton, and Dickie Wells, trombones; Coleman Hawkins, Ben Webster, Buster Bailey, Hilton Jefferson, Garvin Bushell, and Haywood Henry, reeds; Red Richards, piano; Al Casey, guitar; Bill Pemberton, bass; Jimmy Crawford, drums. It was billed as "the big reunion," as all the musicians except Jordan, Casey, and Richards had at one time or another played in Fletcher Henderson's orchestra. Now in 1957, these alumni of the Henderson College of Musical Knowledge gathered to show off their postgraduate chops. The score of this '57 version of Sugar Foot Stomp is most certainly marked pp for "pound plenty" -- it's as loose and swinging as it gets:


For those of you keeping score at home, here's the batting order. Following the opening ensemble, the trumpets introduce themselves with one chorus each, from 0:18 to 0:56: Jordan, Thomas, and Berry. Another reed ensemble, then the trombones for one chorus each: Morton, Wells, and Higginbotham. Clarinetist Bailey presides for two choruses, then Rex takes the traditional King Oliver cornet part for three, heading skyward and leaving the earth's atmosphere somewhere around 2:53. That's when the two tenor titans take over. Webster and Hawkins trade choruses as the riffs build and the number rocks its way to its exultant conclusion.

Advanced students should re-listen to Berry's remarkable solo, which knocks me out every time. Emmett makes his statement on the blues from 0:44 to 0:56. It's a skittering, staccato melody line, utterly original, perfectly conceived and executed, with nary a high note. Just twelve seconds long, but to me a timeless gem.

I can't end without a word about the under-regarded Joe Thomas. In his career Thomas eschewed flash in favor of cogency, composure, and taste. Even though they're improvisations, his solos have a balanced, "thought-out" quality to them, which makes them all the more astonishing, at least to me. (For years at Chautauqua, we were privileged to hear solos by the late Joe Wilder with that same quality.) For extra credit, you can read more about Joe Thomas here.

Posted by Still a Brooklyn Kid at 05:28 No comments: