Over a year ago I posted a memory of being a teenager without a draft card, standing outside the Metropole listening to Henry "Red" Allen with Coleman Hawkins, J.C. Higginbotham, Buster Bailey, Marty Napoleon, Cozy Cole, et al. That was before I was hip to Hipcast -- that is, before I knew how to post audio. Time to make the memory complete by adding music, recorded at the time with the same personnel.


The majesty of Red Allen is captured in this splendid 1958 portrait by Lee Tanner, which comprises one side of a postcard propped up on my desk, a constant source of inspiration.


But my Metropole memories aren't primarily visual, mainly because you couldn't see much of anything from the sidewalk, aside from occasional glimpses of Red in profile on the bandstand.


So let's imagine the scene at the top of this post with a few minor changes. It's 1956. The marquee'd names are Red Allen and Coleman Hawkins. The cluster of freeloading listeners and tourists outside the open-doored club has been augmented by two high school seniors who just sat through a college basketball doubleheader at Madison Square Garden. One of them is checking his watch and suggesting it's time to walk down to Times Square and catch the Sea Beach Express home to Bay Ridge. The other, the one with the acne and the crazed look of an adolescent jazz nut, is saying, "Red just called Ain't She Sweet. Let's stay for one more!"

Posted by Still a Brooklyn Kid at 06:55 No comments: 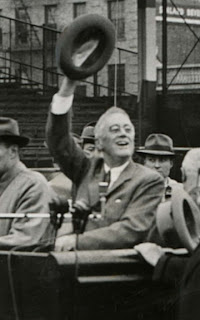 As I was just five years old at the time, my role in Franklin Roosevelt's campaign for a fourth term in 1944 was limited. With war in Europe and the Pacific still to be won, the president made just one campaign appearance in New York that year, an all-day motorcade through fifty-one miles of streets in Manhattan, Brooklyn, and Queens. The weather was miserable -- cold and rainy -- and FDR rode coatless, sometimes hatless, in an open car. His route included Fourth Avenue in Bay Ridge. That's where we were standing. As the presidential Packard approached, Dad hoisted me aloft and I saw several people ride by, one of whom was FDR.

About six months later I was sitting on the livingroom floor listening to the console radio when I heard an announcer say that President Roosevelt was dead. Mom was out shopping. When she got home she already knew; people had heard the news and poured out into the streets, some weeping, even in Republican Bay Ridge. The trauma, intensified by wartime uncertainty, was bipartisan; we'd lost our commander-in-chief. That evening my parents listened to WQXR, which played a program of the president's favorite music.
By 1948 my Democratic DNA had fully asserted itself and I was as ardent a rooter in politics as in baseball. Of course nobody thought Truman would beat Dewey. I remember a September or October issue of Life magazine, to which we subscribed, with a full-page photo of Dewey and his entourage on a New York ferry. The caption referred to him not by name, but as "our next president."
I have two distinct radio memories of that fall campaign. One was a fiery Truman speech, delivered, I think, to a labor audience. The president was berating the Republicans, giving 'em hell about the Taft-Hartley bill. I had no idea what Taft-Hartley was, but I was deeply stirred when the president proclaimed to thunderous applause, "The Democrats are right and the Republicans are wrong!" On the Dewey side was a radio special of his, called The Victory Express hosted by Robert Montgomery. It was all celebrity guests and gloss and smug complacency, anticlimaxed by a bland speech by the candidate.
I also remember a telling incident from a newsreel. At some midwestern whistlestop Dewey was speaking from the back of his train. Suddenly the train lurched backward, dangerously close to the crowd. "That's the first lunatic I've ever had for an engineer," quipped the candidate. "He should probably be shot at sunrise." Mister Warmth.


Commentators have recently looked to history for a candidate comparable to Mitt Romney. Dewey is the one Romney reminds me of: polished, plastic, charmless, and content-free. 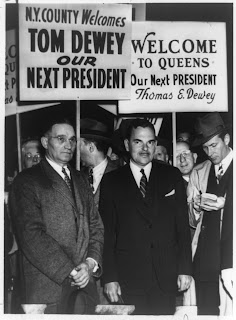 My contrasting radio and newsreel impressions of the two candidates gave me hope. Emboldened by my spot-on prediction that the Cleveland Indians would beat the Boston Braves in six games, I announced to my parents that Truman was definitely going to beat Dewey.
This belief made me an embattled minority on 71st Street, where I played my small but crucial role in the Truman campaign. Practically all my friends were Republicans. Debates raged daily, at approximately the same level of reason, logic, and volume as the arguments during our stickball games. We weren't debating the merits of Taft-Hartley or the reconstruction of postwar Europe. The main issue hit closer to home: Republican kids were spreading the vicious rumor that if Truman were elected, the Democrats would make us all go to school on Saturdays. It was a tough charge to rebut. The best I could do was, "They will not." 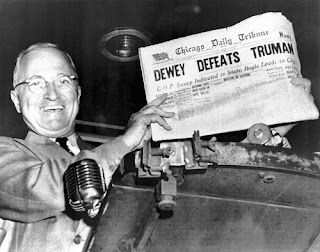 On election night I listened nervously to my bedside radio as the results slowly trickled in. It was too close to call. Truman seemed to be ahead but pundits were saying that when the votes from the west were counted, Dewey would pull ahead and win. (Thus was born my lifelong distrust of political pundits.) This was the state of things when I went to sleep.
When I came downstairs the next morning, Mom and Dad were all smiles as the radio bulletins confirmed that Truman had pulled off the biggest upset in political history. I'd called it! I couldn't wait to go to school and gloat.
Soon the election was forgotten and our kid-disputes returned to more quotidian topics, like stickball ground-rules and whether the Dodgers were as good, position-for-position, as the Yankees.
Posted by Still a Brooklyn Kid at 05:55 1 comment:

Born to swing: the greatness of Mildred 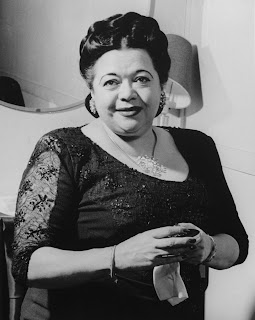 Because I am here posting six Mildred Bailey records in a row, you might conclude that I think she was one of the best singers ever. You'd be right. I know of no other jazz-pop singer who can delight and move me in such a wide variety of ways. She was a swinging big-band vocalist, epitomized by Born to Swing, the first song playable below, recorded with husband Red Norvo's band in 1938. I love the pungent way she invokes a certain well-known floogie near the end. (Red and Mildred were known as "Mr. and Mrs. Swing," a sobriquet well deserved. Norvo always maintained she was the keenest judge of musical talent he knew.) She could sing straight melody - no tricks or mannerisms - and communicate heartfelt emotion, as in the haunting I Can't Face the Music by Rube Bloom and Ted Koehler, recorded with Norvo in '38 in a superb arrangement by Eddie Sauter. She sang the blues as well as anyone: You Don't Know My Mind is from '39 with a trio led by pianist Mary Lou Williams. She could make you smile while tossing off Johnny Mercer's clever, densely packed lyrics in Arthur Murray Taught Me Dancing In a Hurry, recorded with Norvo in '42. And she could just flat-out melt you with the heartbreaking vulnerability of You Started Something recorded in '47 with the Ellis Larkins trio. Our finale, a live concert performance from '42 of Vincent Youmans' More Than You Know with Billy Kyle on piano. Feel free to join in the applause.


Mildred Bailey was inducted into my own personal hall of fame a long time ago. The fact that the commissars of jazz in Lincoln Center haven't yet certified her as Great after all these years says more about them than about her.

This is an eighteen-minute set, so take a break from the internet, sit back and enjoy some Mildred Bailey.


For more Moldred, go here.
Posted by Still a Brooklyn Kid at 08:35 No comments:

Dust off those spring training cliches 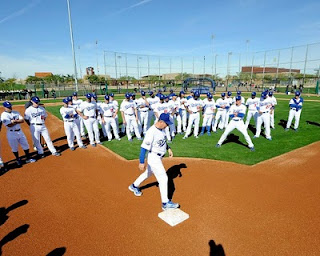 "We've got competition at every position. That's the kind of problem a manager loves to have."
"I'll guarantee you this: we're gonna play aggressive, entertaining baseball."
"If A and B continue to develop, and C and D get back to where they were two years ago, our pitching staff will be solid."
"This year I've set some personal goals for myself."
"My velocity is coming back."
"We're gonna surprise a lot of people."
"I love the chemistry here."
"We're working on the little things that win ballgames -- hitting the cutoff man, taking the extra base, bunting, hitting behind the runner."
"Anybody can win in this division."
"I don't know where he got a reputation as clubhouse poison. Far as I can see, he's a terrific teammate."
"Our rebuilding plan is on track."


[From the manager of a team with a losing spring-training record] "Our record in spring training means nothing. Once the season begins, you can throw out the numbers."


[From the manager of a team with a winning spring-training record] "It's good to instill winning habits."


Additional contributions from cliche-loving baseball fans are welcome.
Posted by Still a Brooklyn Kid at 08:41 No comments:

What was the first published twelve-bar blues?


Pose that question to ten people at random and chances are that nine will instantly reply, "Why, of course it was W.C. Handy's Memphis Blues published in 1912." Or words to that effect.
Handy, a well-schooled musician and leader, did more than anyone of his time (the ragtime era) to popularize the blues, presaging the jazz age and the blues craze of the 1920s. Handy had toured the south for years, studying and documenting the twelve-bar form at its folk sources. He was, wrote Isaac Goldberg in Tin Pan Alley, "the first to set down upon paper, to fix the quality of the various 'breaks' as these wildly filled-in pauses were named. With a succession of 'blues' he fixed the genre."


Handy's first song was Memphis Blues published in 1912. St. Louis Blues and a string of successful songs would follow (the Handy oeuvre is best heard here) but Memphis Blues was the first, which would make it the first published blues, right? That would have been my guess until about 1994 when I purchased this first-rate Sackville CD with drummer Hal Smith, pianist Keith Ingham, and clarinetist Bobby Gordon. 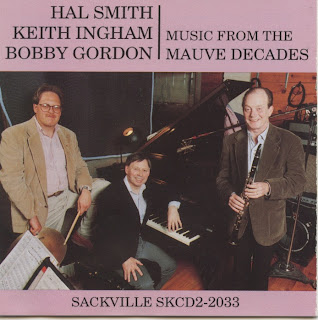 The answer to today's question comes in a song whose chorus I've known all my life, a song published in 1911, one year before Memphis Blues. As Mr. Ingham writes in the liner notes, "the verse of this ditty [a verse I'd never heard before] is a twelve-bar blues, so to Bostonian Nat Ayer goes the credit for being the first to use the blues in a popular song."

Nat Ayer? Who he? A songwriter, pianist, singer, and actor, that's who, one who contributed extensively to Broadway musical comedies and London West End revues, mainly between 1908 and 1922. (His other enduring song is If You Were the Only Girl In the World.) How, where, and when did Ayer come to know the twelve-bar blues? I have no idea; but his hit song of 1911 typifies a process of musical 'fusion' as old as America itself.

Posted by Still a Brooklyn Kid at 07:55 No comments: