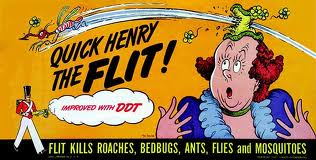 'Tis the season for universal compassion, extended even to the wee beasties among us. Hence this musical excerpt from the 1930 film Just Imagine, a science fiction fantasy in which a fellow wakes to find himself fifty years in the future, in 1980. (Imagine that!)

The song is Never Swat a Fly by DeSylva, Brown & Henderson, performed by Frank Albertson and Marjorie White aboard a wondrous, state-of-the-art mode of travel called... a dirigible! Why Frank and Marjorie are ruminating on this particular subject is unknown to me; I've not seen the complete film. If the verse is to be believed, love explains all, but one suspects they've been reading Robert Burns, or studying up on Buddhism. I've heard this sermon before, delivered in 1992, sans verse, by those eminent theologians Marty Grosz, Keith Ingham and their Hot Cosmopolites, but here it is in its original incarnation:

Love has made me tender, I now appreciate
Ev'ry little creature on this Earth that has a mate.
Once I hated crickets, I couldn't stand a bee,
Now here is the motto that I follow faithfully:

I'm the same as you are, tears come to my eyes
When I see professors chasing helpless butterflies.
Fishermen are hateful, they lead a wicked life,
Why, ev'ry day they separate the husband from his wife!

(1) How exactly does a bug, when making hey-hey, evince that sexy quality known as "It"? With flirtatiously fluttering ganglia?

(2) Even more puzzling: What was the dialogue leading up to this number? This question has me so flummoxed that I'm throwing it open to my readers. A valuable prize awaits anyone who can create a believable exchange connecting Never Swat a Fly and a futuristic flight in a dirigible. For the sake of this contest, we're assuming that the song was logically integrated into the plot, and not just randomly interpolated. (The latter is far more likely.) The best I can do is this:

"Funny you should mention ants. I've been thinking..."

This contest is open only to those who've never seen the complete film. That's probably 99.44 percent of my entire readership (in other words, optimistically speaking, roughly nine people). Each entry must be accompanied by two box-tops from Kellogg's Pep. In case of a tie, duplicate prizes will be awarded.